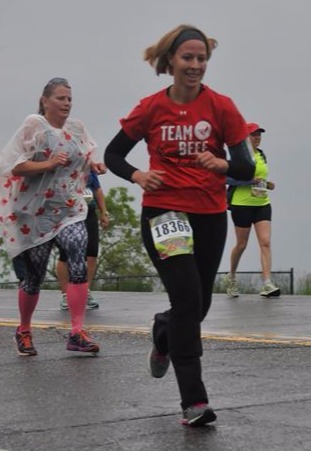 Merretta Anderson running a marathon in her state of South Dakota.

Team BEEF is About the Message

Merretta Anderson has been running since college, but it wasn’t until after she graduated she began to take it more seriously. Since 2014, she has been a runner for Team BEEF South Dakota.

She and her husband, Chance, own and operate a ranch south of Isabel, South Dakota. They raise Black Angus and Gelbvieh crosses mostly, along with a few Herefords.

“I just heard about it through that way and being an owner of a ranch and growing up on a ranch, I thought it really promotes the heart of what we are. It was a great fit,” she said.

Anderson said Team BEEF is another way to reach out to people that don’t normally have association with the cattle business.

“Maybe their only connection is having it on a plate or in a store and having that connection with us helps,” Anderson said. “When I ran at Grandma’s Half Marathon in Duluth, when people saw the jersey they were yelling ‘go, beef! Go South Dakota!”

People make the connection, she said, to the point people ask her “do you have a ranch? Are you affected by the prices? Is it as bad as we hear?”

Anderson said it’s about getting the nutrition part of beef out, but also the industry as a whole. The team also makes her more conscious of what she eats, though steak is still her family’s first choice.

“I think it’s a great opportunity. By no means do I classify myself as a runner. I like to run when I can. That’s why Team BEEF is such a great thing. You have all types of runners. It’s great to have because I can fit in between the kids, the ranch, and teaching school. They don’t eliminate anyone from it. They really reach out to all levels,” Anderson said.

Team BEEF has helped motivate Anderson because a person is working on something bigger than themselves. It’s a commitment and accountability to the beef industry to get the word out there. It’s not just about running, but about the industry and how everyone is affected by it.

And while her husband doesn’t run, Anderson said he is almost at every race as moral support.