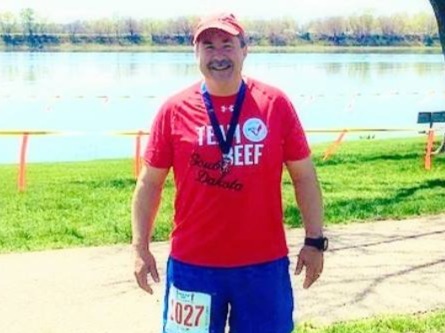 Tim Mullican has ran 96 of his 98 marathons in the last four years.

You Don’t Know Unless You Try

A marathon is seen by many to be a true testament of endurance…one that takes you on a personal journey of 26.2 miles. For many individuals it is something they hope to achieve once in a lifetime. However, Team Beef South Dakota member, Tim Mullican, has accomplished this feat 98 times!

In 1975, while in high school, Mullican ran two marathons. The other 96 have been ran since he was 53 years old, meaning all but those two have been ran in the last four years!

The 57-year old’s statistics are impressive. In 2016, he ran 31 marathons with an average of 1,500 miles a year. In the last four, he’s ran approximately 6,000 miles and just this year he completed his goal of running marathons in all 50 states with the completion of the Kona Marathon in Waikoloa, Hawaii.

Many factors go into play when choosing to participate in a marathon. Weight and high blood pressure played a large part in Mullican’s return to running. Another contributing factor was that he wanted to see if he could do it. “I heard one of my coworkers was running a half-marathon. I thought if she can do it, I can do it, so I signed up for a half-marathon. I did pretty well at it and I decided to keep training,” Mullican stated.

He decided that since he went through all the work of getting in shape he might as well run a full marathon. Mullican went on to win his age group in the River Rat marathon proving that it is never too late to start something great.

Mullican works as a biology professor at Dakota Wesleyan University, but has a secondhand background in the beef industry. His parents owned a feed store and Mullican was raised around livestock producers. He participated in FFA during high school and bought a bred heifer as part of that program.

“I think there are a lot of misconceptions about beef and I think that Team Beef helps to educate people and correct those misconceptions,” Mullican said. “I think a lot of people think that all beef is high in saturated fats and cholesterol and you should try to avoid it as much as possible. I don’t think its necessarily the case. There’s lean cuts. It’s like anything else, if you eat it in moderate amounts there’s nothing wrong with that.”

One of Mullican’s preferred cuts is sirloin. He eats a lot of it due to it being a leaner cut.

Marathon selection comes from if Mullican finds them to be interesting. He ran a marathon over Labor Day weekend in Manchester, TN called “Race For the Ages”. The goal was to see how far an individual could run in the number of hours of the person’s age. Mullican ended up running 105 miles total. “I wanted to do that one to see if I could do it in one run,” Mullican said. “You just don’t know if you’re going to be able to do it unless you try.”